The Untold Story of Mark Twain and His Cat Obsession – 4 Feline Facts You Never Knew!

He once turned a story about a frog-jumping contest into required reading for the rest of the country. He invented direct marketing by way of the white picket fence. He piloted a steamboat down the Mississippi River. And you might not even know his real name.

Samuel Clemens, better known as Mark Twain, is referenced in libraries across the world, and, while ranking his best works may keep literary critics busy, his preference in pets is unmistakably cut-and-dry.

“If man could be crossed with the cat,” Twain wrote, “it would improve man, but it would deteriorate the cat.” 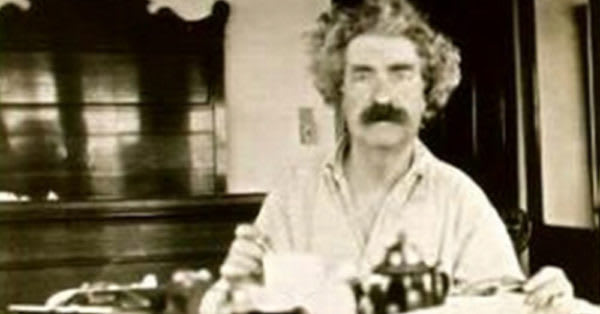 He owned as many as 19 cats, whose names were perhaps even more impressive than their master’s wit. Apollinaris, Beelzebub, Blatherskite, Buffalo Bill, Satan, Sin, Sour Mash, Tammany, Zoroaster, Soapy Sal and Pestilence, Mental Floss reports, are just a few of them.

He loved them more than most humans and was confounded by humans who didn’t love them back.

“When a man loves cats, I am his friend and comrade, without further introduction.” 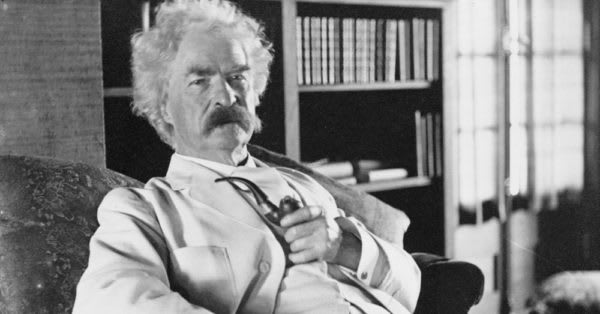 One cat named Bambino was given to Twain by his daughter Clara, the only of his offspring to survive their father. Following the death of Twain’s wife, Livy, Clara was sent to a sanatorium, and Twain locked himself up at home. Clara was prohibited from keeping the animal, which she had nurtured until another patient informed the facility staff, and Twain took Bambino in.

The cat helped Twain through a deep depression, and after he went missing in New York City, the author offered a $5 reward for anyone who could return Bambino to his home at 21 5th Avenue in New York City, according to the Smithsonian. An advertisement in the New York American read, “Have you seen a distinguished-looking black cat that looks as if it might be lost? If you have, take it to Mark Twain, for it may be his.”

Twain offered his own concise description: “Large and intensely black; thick, velvety fur; has a faint fringe of white hair across his chest; not easy to find in ordinary light.” 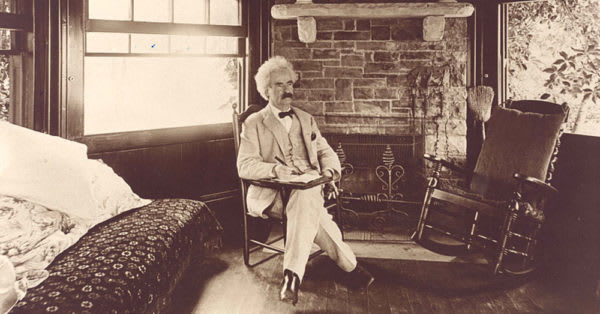 While traveling, Twain was a great steward of the felines who crossed his path. He couldn’t bring his own cats while he toured speaking engagements, so he rented those that were available.

“The most famous cat-renting episode occurred in Dublin, New Hampshire, in 1906,” New England Today reports. “Twain biographer Albert Bigelow Paine was there when the author rented three kittens for the summer. One he named Sackcloth. The other two were identical and went under the joint name of Ashes.”

Twain was also known to treat cats far better than he treated most humans.

“Once, as he was about to enter the screen door that led into the hall, two kittens ran up in front of him and stood waiting,” Paine said. “With grave politeness he opened the door, made a low bow, and stepped back and said, ‘Walk in, gentlemen. I always give precedence to royalty.'” 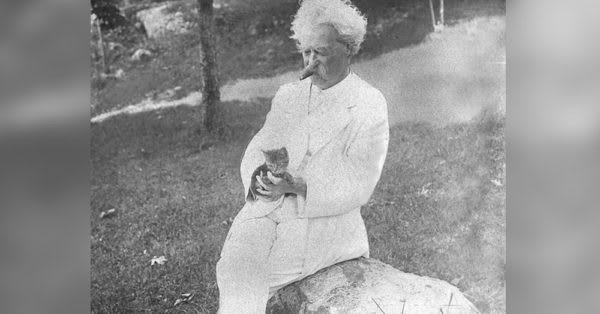 Stories of Twain’s fondness for felines are almost as numerous as his works of fiction, but if you believe animal rescues need to be seen to be believed, click the button below and watch what a group of friends did when they found a lost dog at the bottom of an abandoned mine.