This Little Girl Found Something Amazing In A Secret Room Hidden In Her House!

Children don’t yet know the limitations of the world. They still believe in magic potions, the mischief of fairies, and buried treasures. But very few are lucky enough to find a real treasure concealed behind the wall of their bedroom!

There are some parents who go above and beyond to make this imaginative time in a child’s life memorable. One father waited patiently for seven years in order to give his daughter a magical adventure she’ll likely never forget. And it’s the type of story that’s almost too cool to be true… 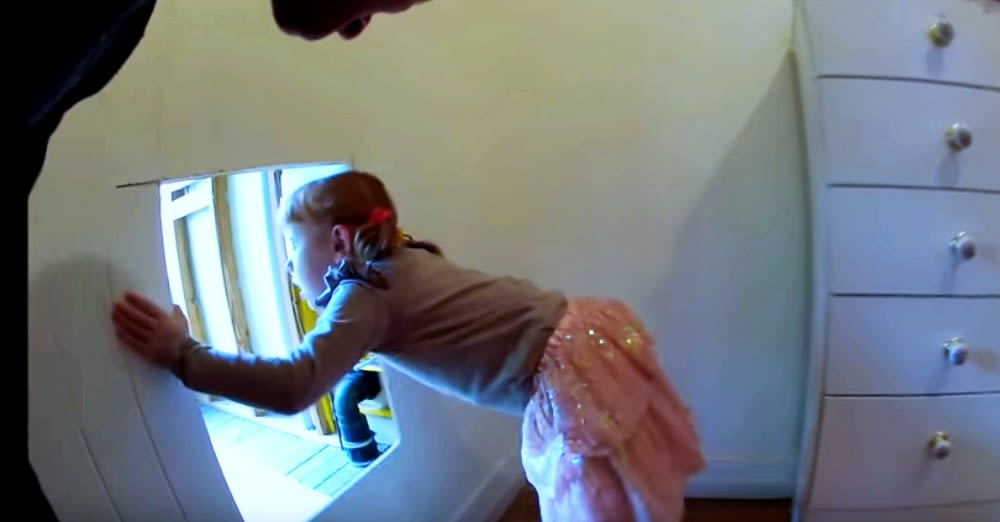 The father in this video came up with a brilliant idea once he knew he was having a child. He decided to hide a treasure for his unborn daughter in a small room on the second floor of his house. He then sealed off that room with the treasure still inside of it. He left the room alone while his daughter grew up. It wasn’t until she was six that he decided to send her on an adventure for pirate bounty.

His daughter had been asking for extra spending money. So he told her she could earn some by cleaning out a window box. Little did she know that he’d hidden his own homemade treasure map underneath a pile of brass odds and ends.

The girl’s dad, grandma, and mother are with her when she finds the realistically distressed map. She seems delighted that the map is of her own house. She notices that the map has an “x” marking treasure, and a label revealing a secret room. Quickly, she takes off to find the hidden door concealed somewhere upstairs…

While looking for the right room, the girl gets some help from her father. The two of them spread the map out on top of the stairs and narrow down the treasure’s potential location to her bedroom. Once inside the room, the girl cleverly isolates a part of her wall that is hollow by pounding on it. She thinks that’s where they should look.

After some speculation as to what the treasure might be, the only option seems to be to cut into the wall. The daughter hops on the bed with her granny and mom, and puts on some protective headphones as her dad heats up the electric saw and cuts through the partition.

The father successfully cuts through the wall, creating a large enough entrance for his daughter to crawl through. He’s waited six years to see this look on his daughter’s face.

When she finds the treasure, she gets excited because she thinks that it is money (enough to go to Disney World). However, instead of cash, her father had hid a small treasure chest full of doubloons, necklaces, earrings, and other treats that a pirate might keep in hiding. She marvels at her reward and shows off the haul to her grandmother and mom.

This father gave his daughter an experience of a lifetime. Not only did he set up a treasure hunt for her that took years to actualize, but it was something they did together as a family. The only hi-tech gadgets they use are the ones the adults used to record everything. There are no video games, no smart phones, and no video players to be seen. Just a good old fashioned treasure hunt with the family and some “old” pirate maps.

Read about another secret room recently found inside Cambridge university!