Homemade laundry detergent has a lot of pros: It’s ridiculously cheap, easy to make, and free of all the weird-sounding and potentially harmful chemicals that are in conventional detergents. On the other hand, some folks insist that natural detergent doesn’t actually work to clean your laundry.

To find out whether the natural detergent journey is worth it or not, I followed a typical DIY recipe to make my own, then did a load of sheets to test it out.

This experiment is purely for the pursuit of knowledge. Laundry science. I prefer natural detergent — Mrs. Meyers in the honeysuckle scent, mmm! — but it’s really expensive, so I usually just buy conventional detergent, which works for me just fine. However, conventional detergent is often full of perfumes, dyes, and other chemicals that can irritate some people’s skin or cause breakouts — which is a major problem, since these ingredients stay coated on your clothing long after you’ve washed them. But I don’t suffer from that problem.

I do, however, suffer from what some folks call “environmental guilt.” I know that my regular, $5 laundry detergent is full of ingredients that are harmful to the environment, like solvents and phosphates. And that’s not to mention the carbon footprint of laundry detergent, which is not doing our atmosphere any favors.

So. If you can make your own detergent and save your money, clear your skin, and clear your conscience, why not do so?

Because DIY detergent doesn’t work very well, some folks claim. Homemade laundry detergent recipes don’t actually contain proper detergent, which is impossible to make at home. Instead, they contain soap, along with other cleansing ingredients. But some people insist that, by using soap instead of actual detergent, you run the risk of not fully cleaning your clothes, and also might leave soap buildup in your washing machine.

Despite the naysayers, the internet is FULL of folks who use and love homemade laundry detergent — er, I mean soap — and have been doing so for years. They say it gets their clothes squeaky clean and that one batch lasts for ages.

So what’s the truth?! The only way to find out is to make my own and take it on a test run. 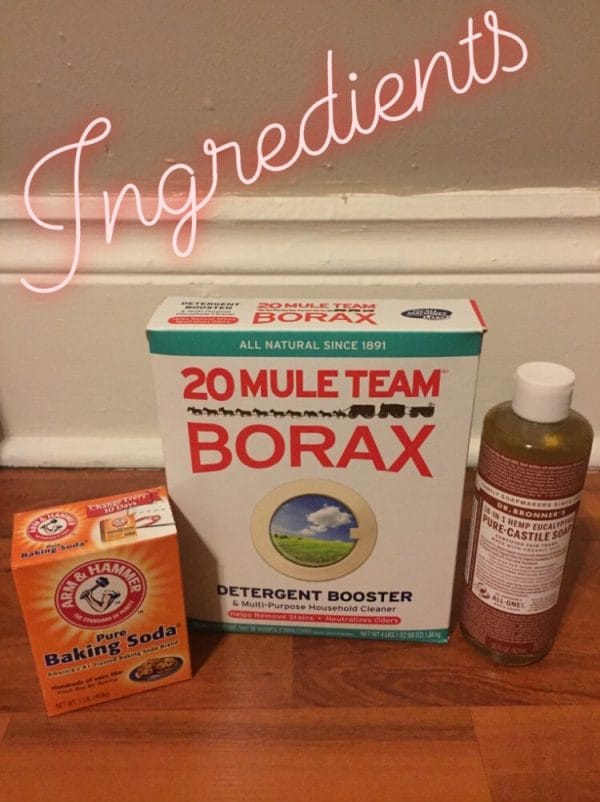 And that’s it.
We all know about soap, but the other two ingredients are less common knowledge.

Washing soda is a close relative of baking soda; it’s sometimes known as soda ash. It softens water, allowing the other cleaning ingredients to do their job more effectively. It also removes oil and grease and is a great stain remover.

Borax is a common laundry booster. It’s an all-natural mineral that removes stains, inhibits bacteria and fungi, deodorizes, and softens hard water. It’s also helpful for removing soap residue! (Note that borax is toxic when eaten, so keep it away from children and pets.)

Many supermarkets sell washing soda in the laundry aisle, but mine didn’t have it, so I opted to buy regular baking soda and convert it into washing soda myself. If you find yourself in the same predicament, here’s how to do that. 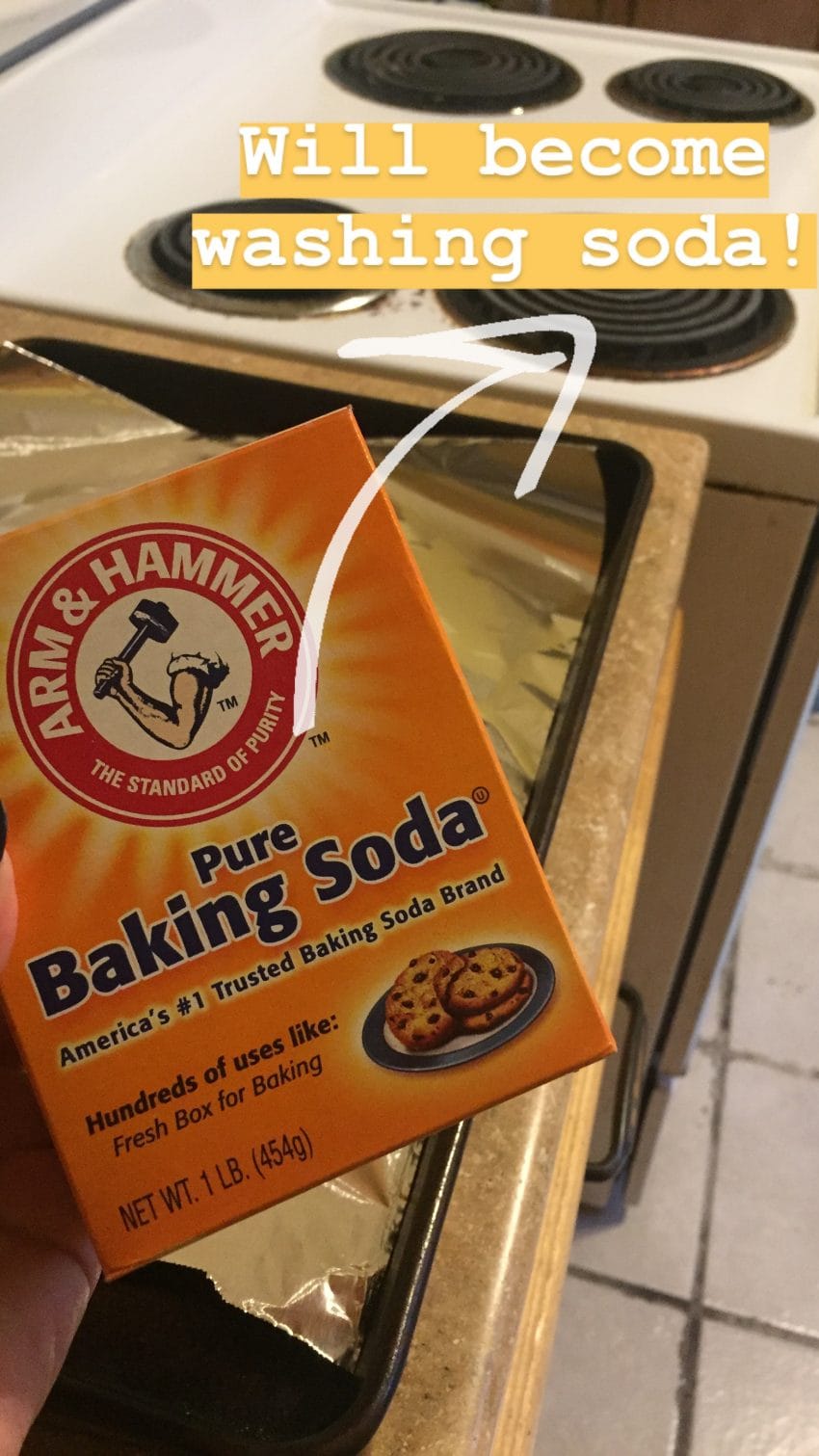 First, I preheated my oven to 400 degrees F. Then I poured 2 cups of regular baking soda into a shallow pan (that’s one whole box). 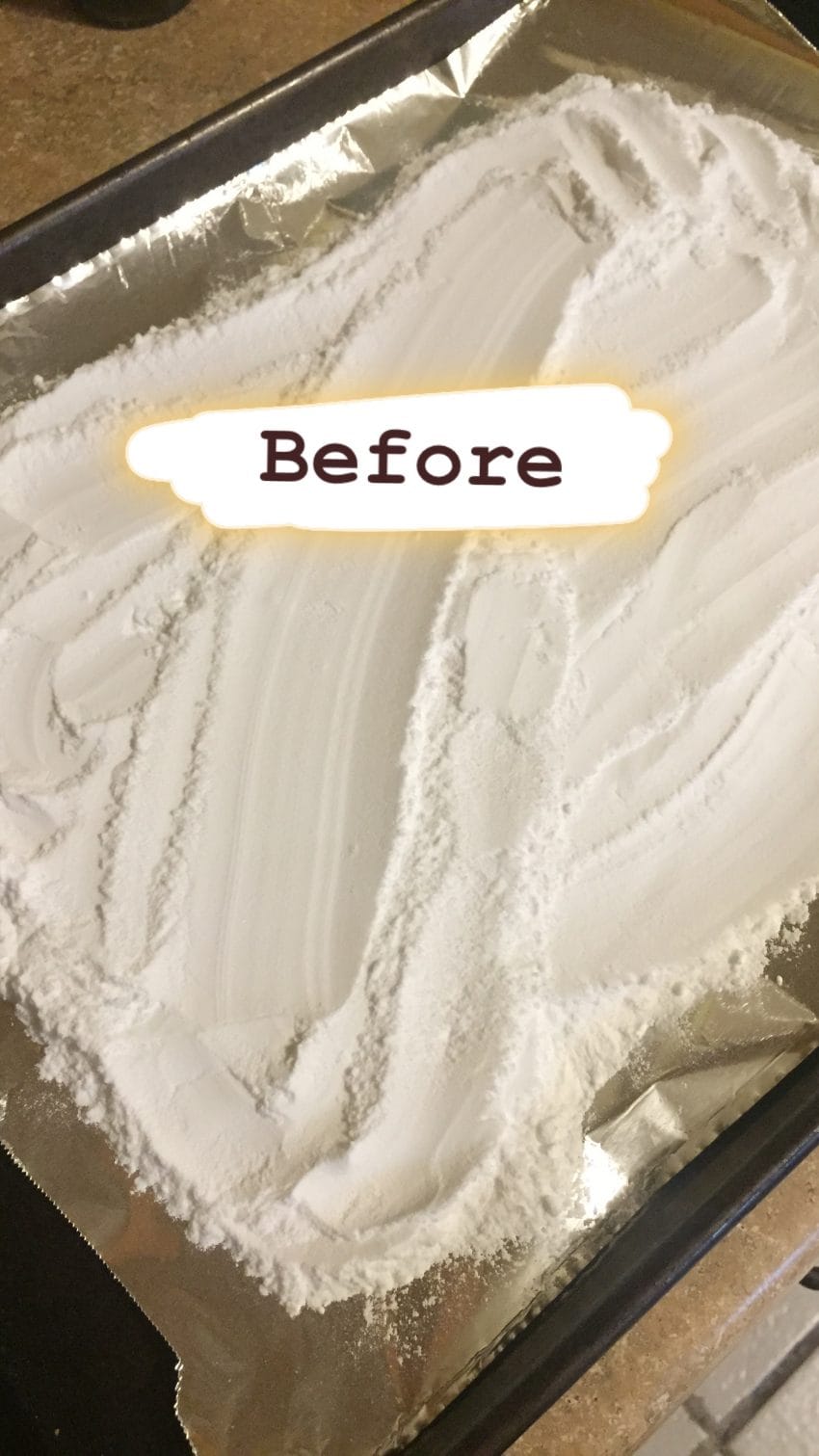 I left it in there for two hours. Halfway through, I stirred it up. I forgot to take a separate “after” photo, but spoiler alert: It looked pretty much the same. 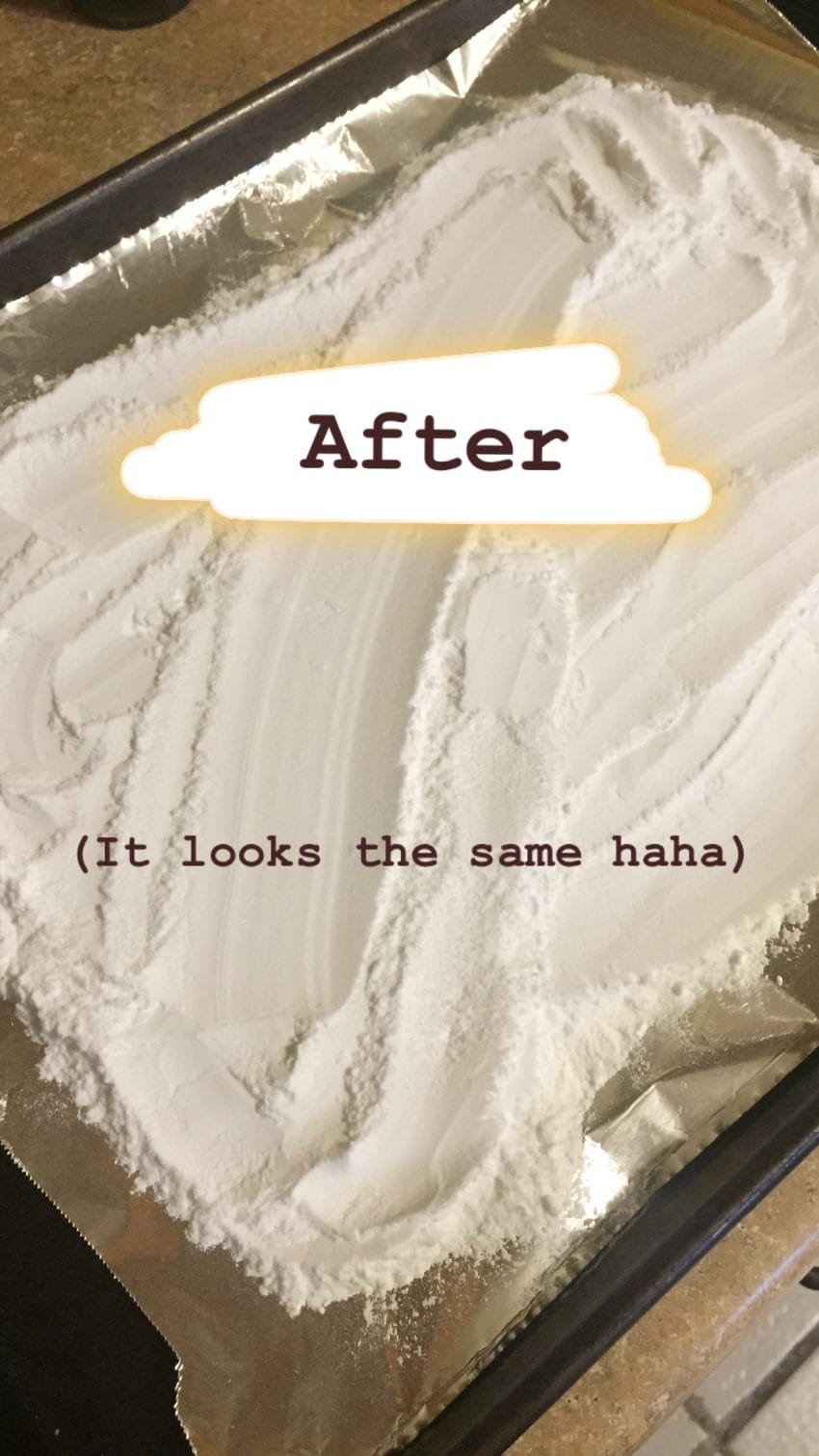 Now that I’m equipped with plenty of washing soda for my recipe, I can go ahead and make my laundry soap! 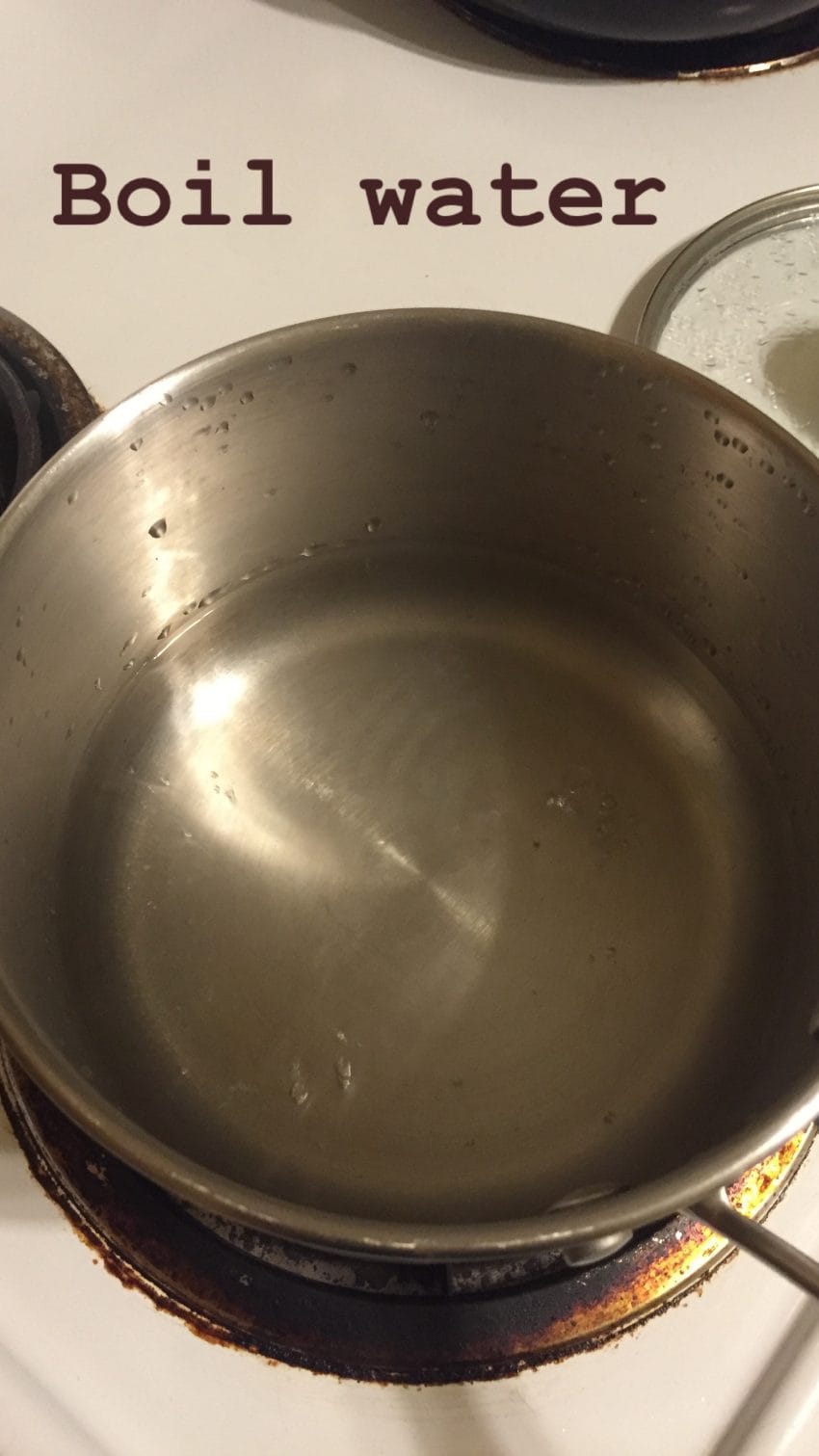 This process is surprisingly simple and quick. It makes about ½ gallon of laundry soap.

First, boil 3 cups of water on the stove. When the water is boiling, turn off the heat and add ½ cup of borax. 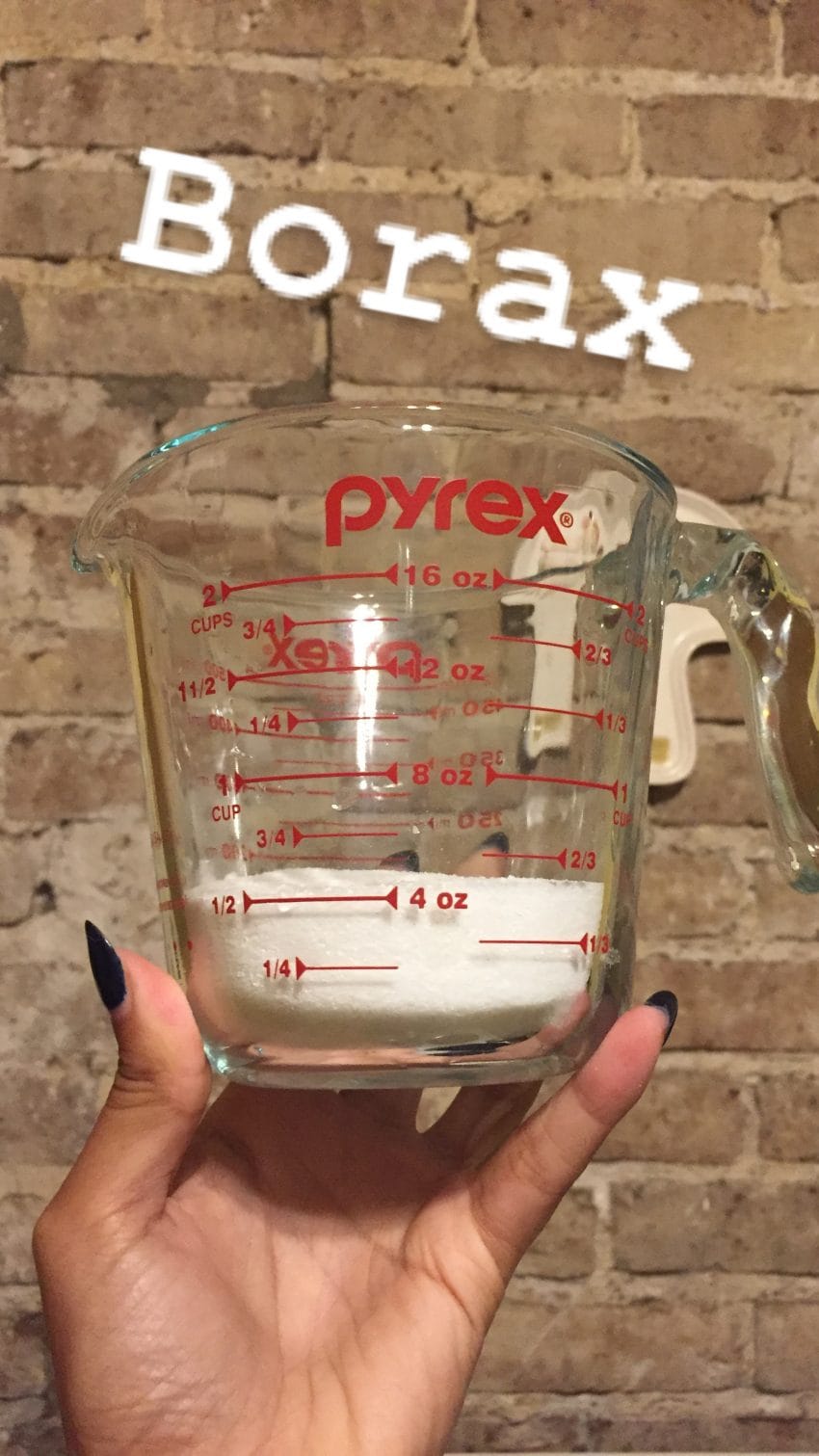 Then add ½ cup of washing soda. 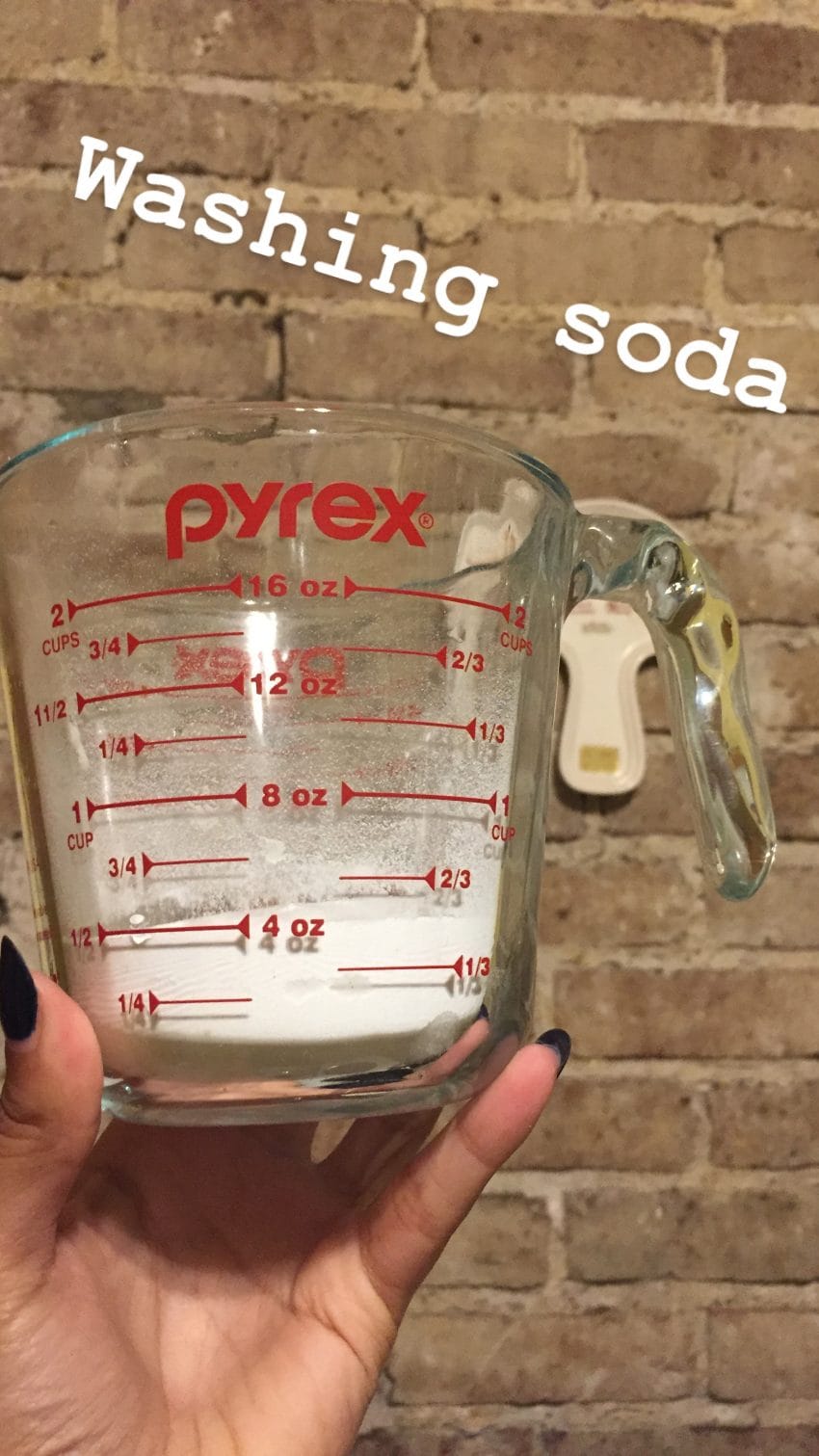 And stir it until it’s dissolved. 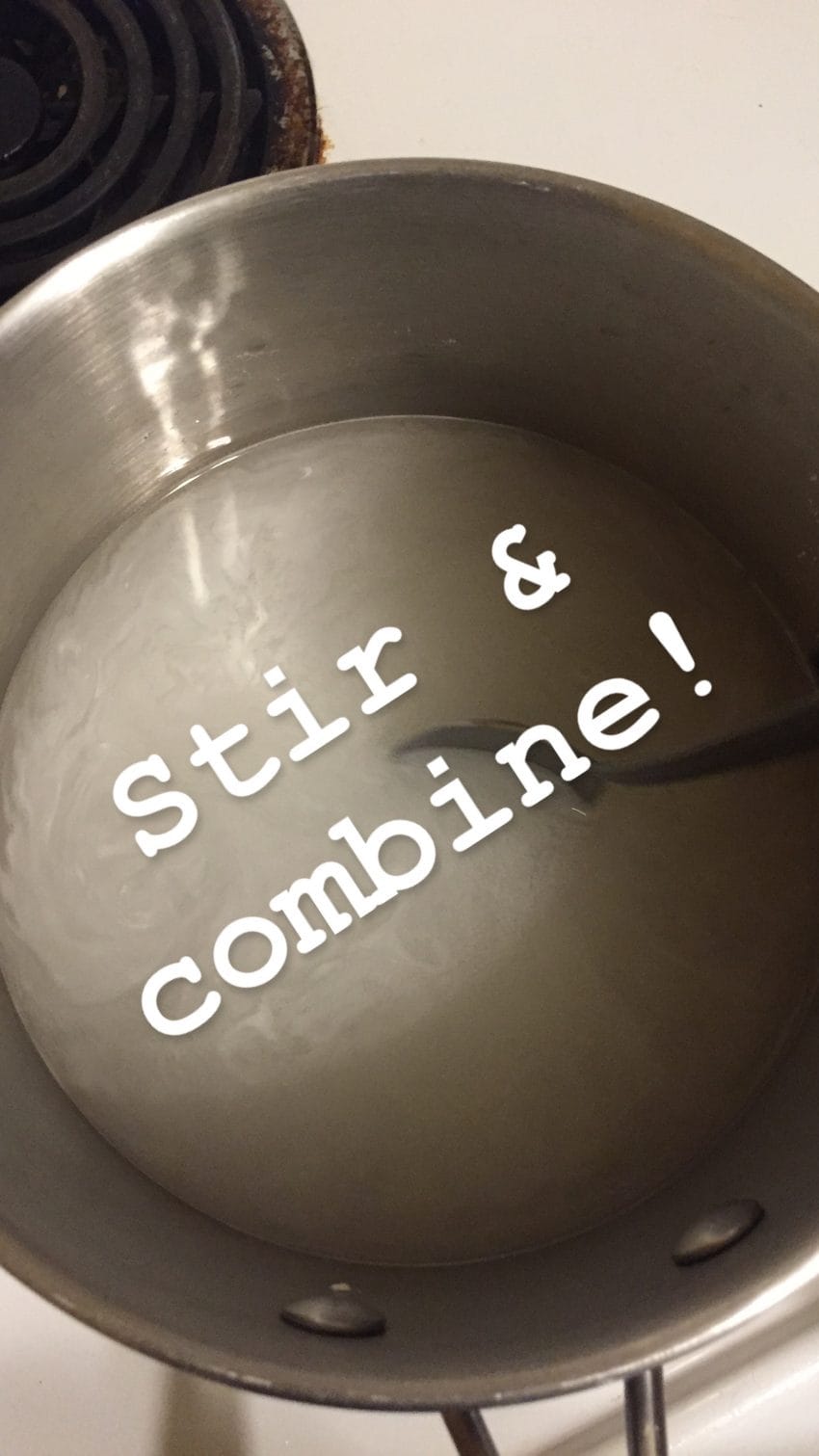 Then, in a separate container, add 5½ cups of room-temperature water.

Next, measure ½ cup of liquid castile soap. I used Dr. Bronner’s in the eucalyptus scent. 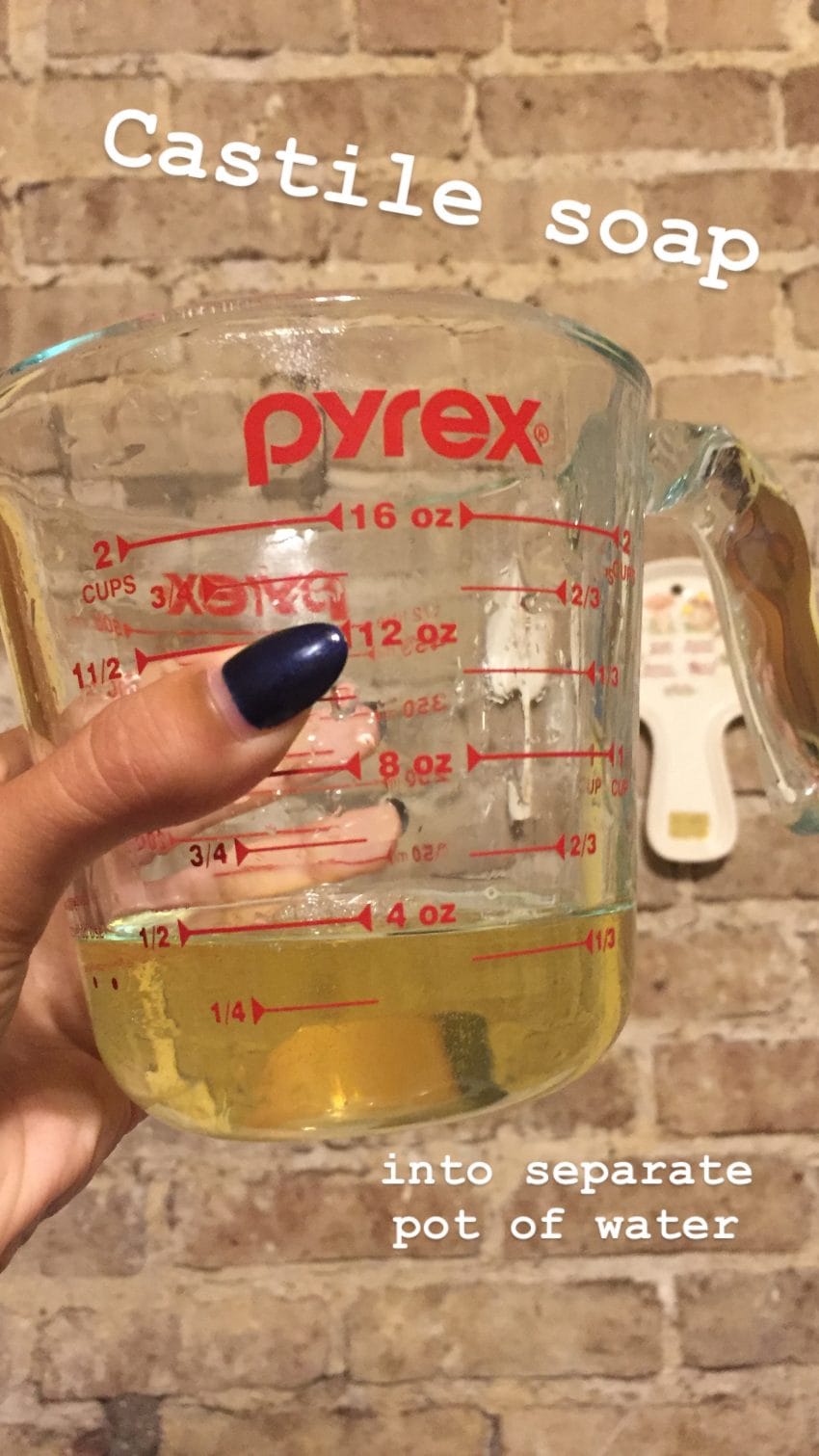 Stir that into the lukewarm water.

Then pour the hot borax-washing-soda-water mixture into the soap water. 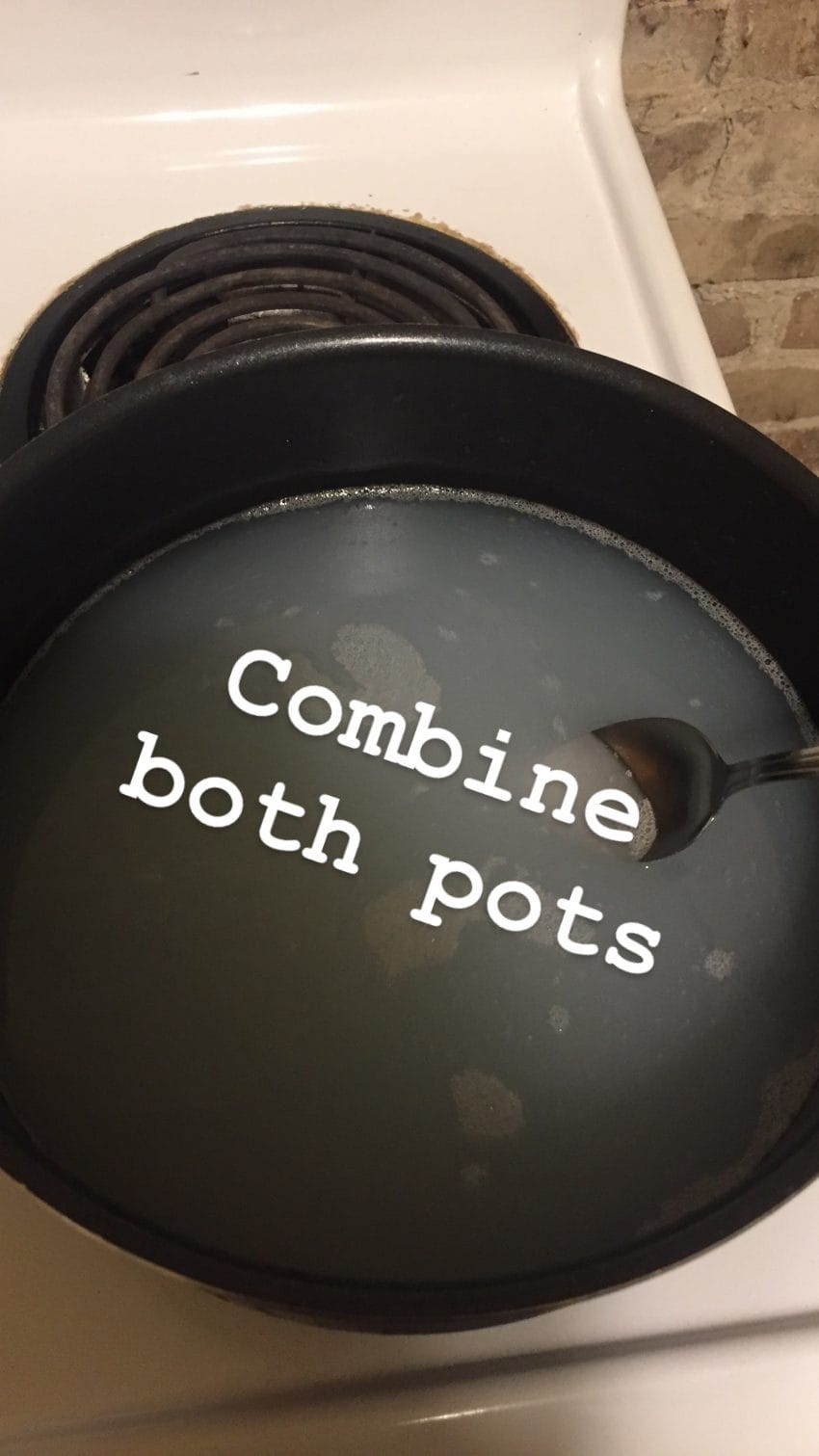 Stir to combine, and you are done! Really — it’s that simple.

I stored my laundry soap in a big glass jar. 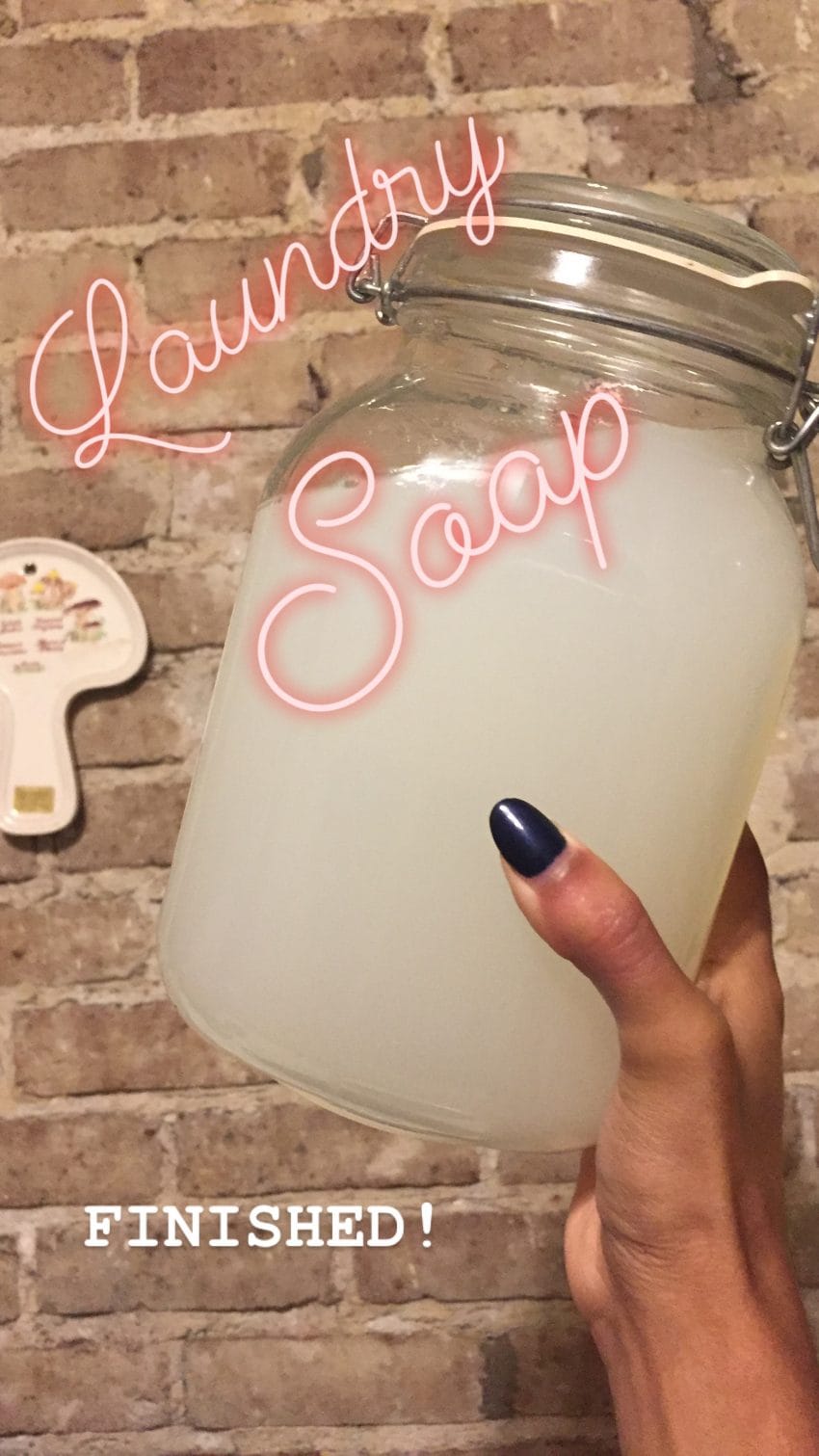 I left it in my laundry room, then I waited until laundry day to test it out on my dirty sheets. 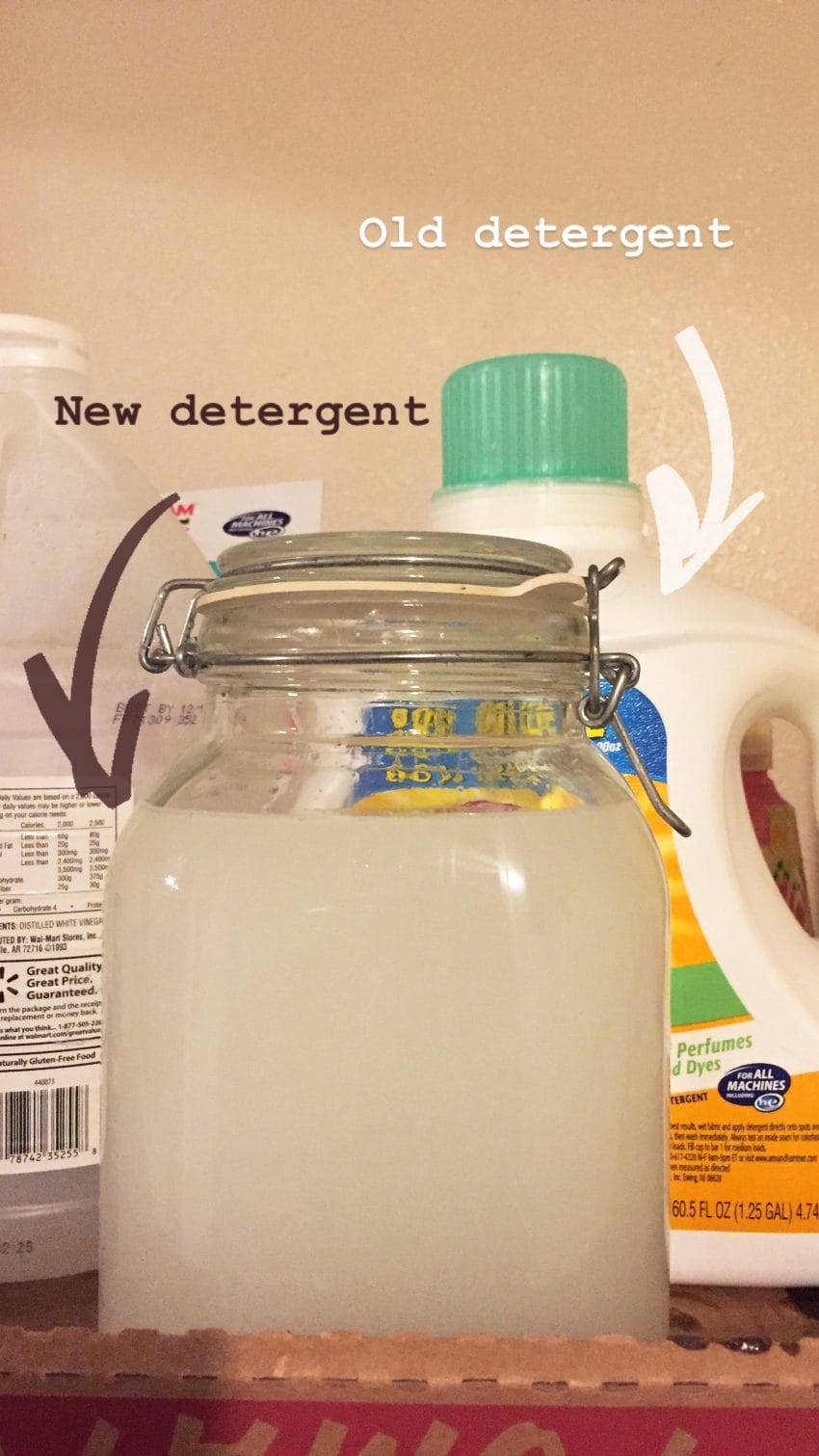 And I must admit, I felt pretty successful despite not having tried it yet. It looks so wholesome and smells so clean! But does it work?! 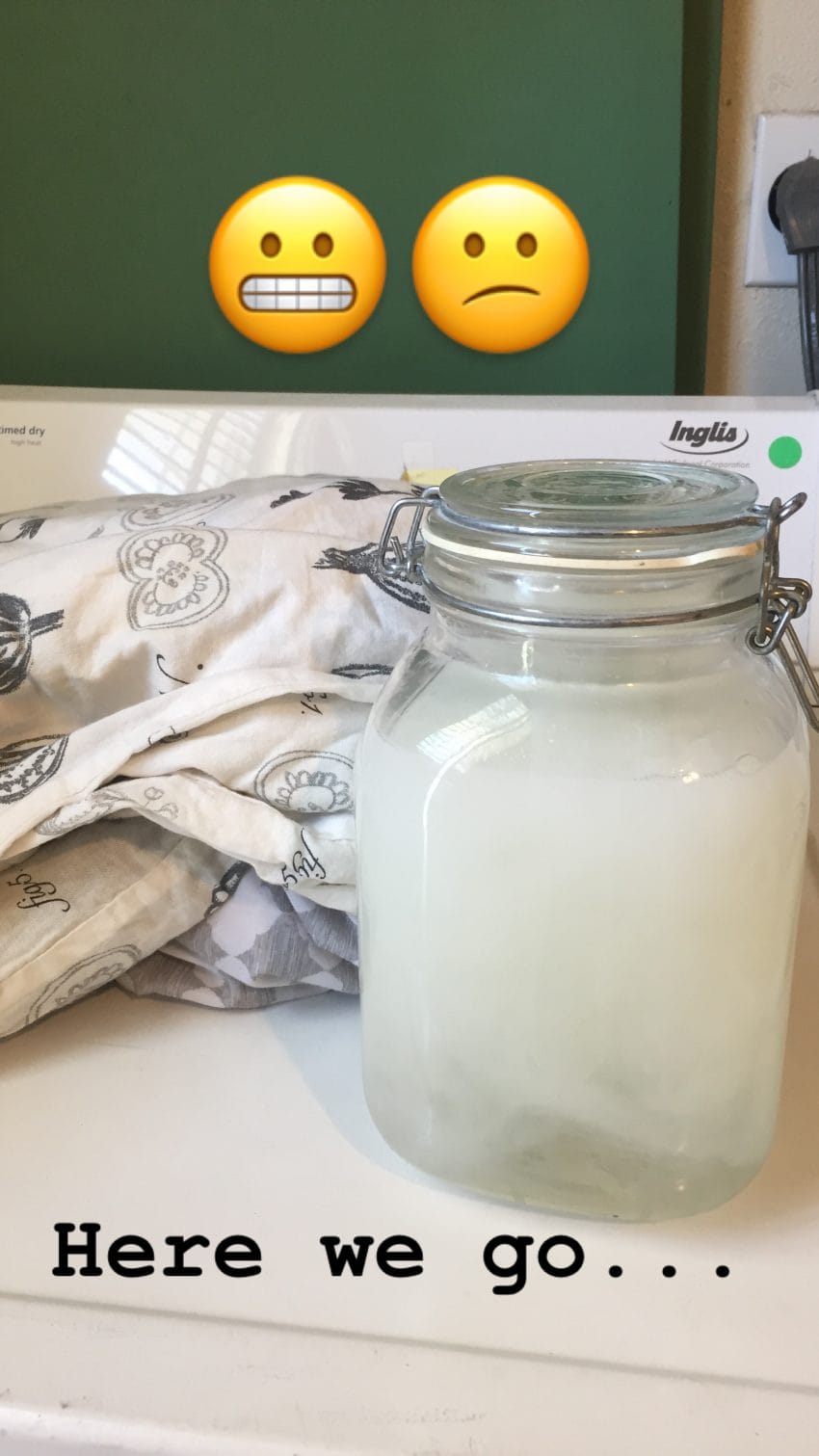 The recipe I used says to use ⅛ to ¼ cup of laundry soap per load. I was doing only a small load, but I still used ¼ cup simply because honestly, I wasn’t totally convinced that my laundry soap was going to work. My sheets were pretty musty at the time due to having been in a cardboard box for a while, so I was skeptical that my laundry soap would really do the trick. 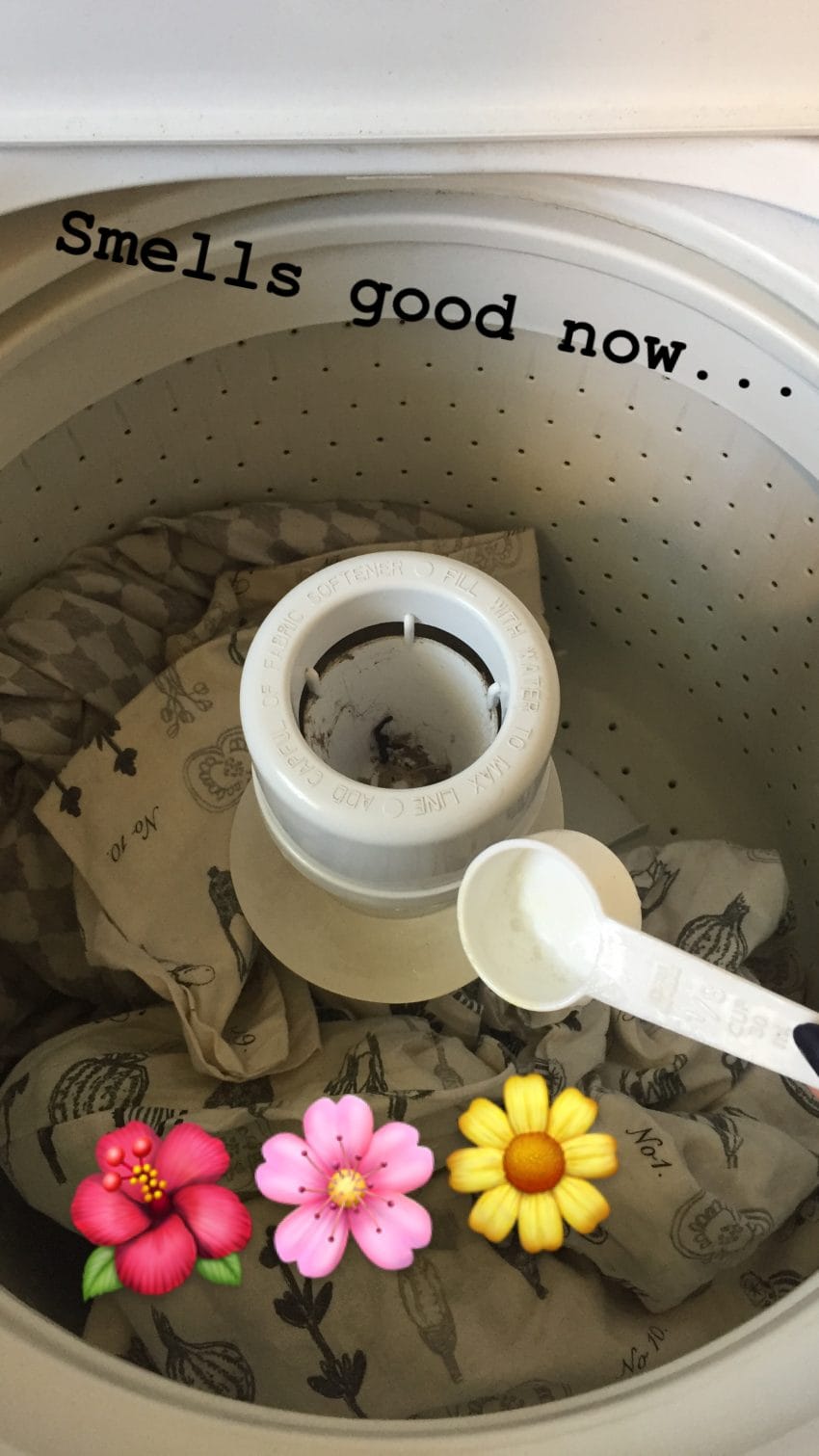 The laundry soap smelled very eucalyptus-y when I put it in. 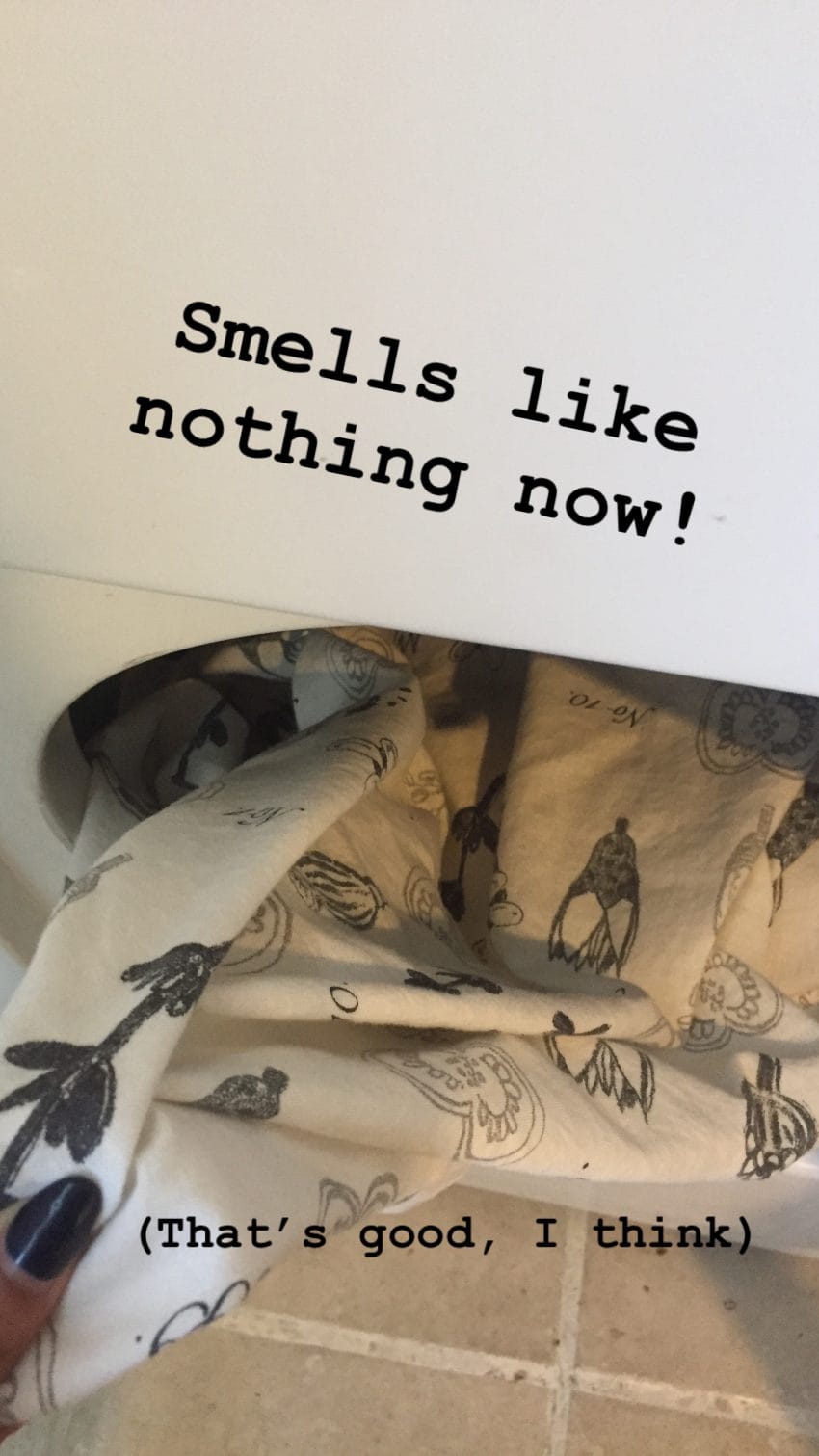 But by the time the sheets had been through the dryer, they smelled like… nothing? Which, honestly, is what my laundry always smells like, since I don’t use products with perfume in them. The fabric did not smell musty, which was my goal.

Also, the laundry soap didn’t leave a residue in my washing machine — but then again, I’ve only used it one time.

I put the clean sheets onto my bed, slept on them, and did not break out in hives. 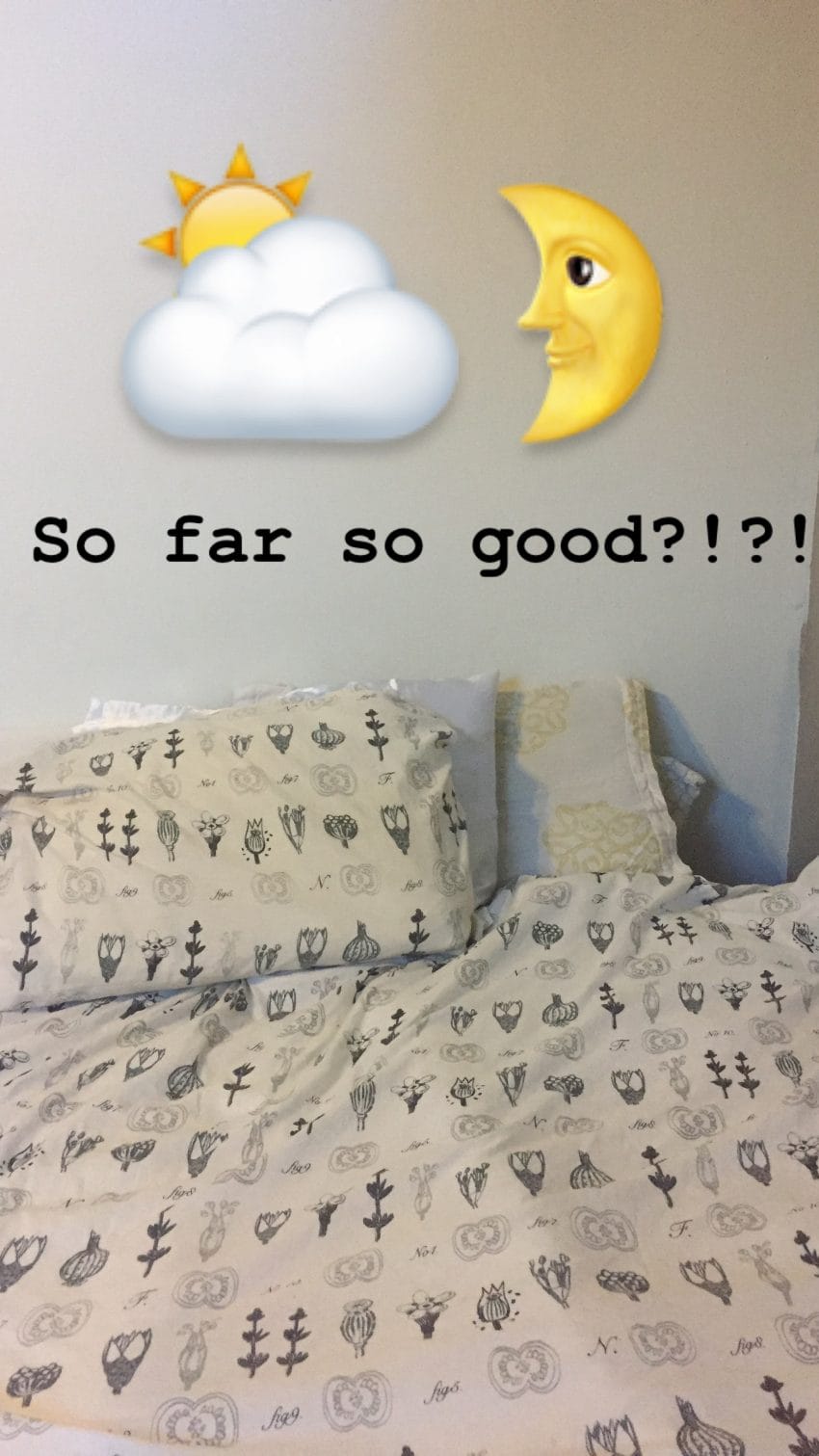 I’d call this a success — at least for now!

Those who are anti-homemade laundry soap say that it doesn’t work well and that it’ll muck up your washing machine. After one use, I didn’t find either of those things to be true. My sheets felt and smelled clean, and my washing machine was fine.

However, I still don’t really trust my laundry soap to be as powerful as my regular detergent. Only time can tell if it will keep my things clean enough over the long term. If I had to choose, I still think natural, store-bought detergent is the way to go.