Earthworms in Your Garden: What You Need to Know

The earthworm is one of your greatest allies in the garden. Nicknamed, “nature’s plow,” it can push through tough soil, creating burrows and loosening the ground so that air and water can pass through, and roots are able to expand.

A single acre of cultivated land can be home to as many as 500,000 earthworms, according to Organic Gardening. Each one of those critters is busy at work tending to your soil and plants. Here are a few ways earthworms contribute to your garden: 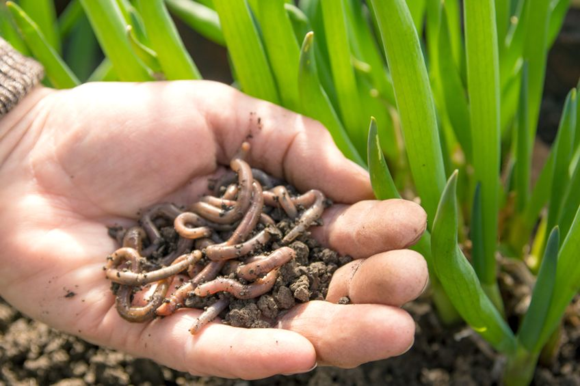 The life cycle of an earthworm is fairly straightforward. At this time of year, most of the worms you’ll find are very young or protected by egg capsules. Once we get into fall, more young worms will appear. Wet weather is when earthworms are at their peak in terms of garden activity. They’ll dig burrows and consume more organic matter, which results in richer, healthier soil. Eventually more eggs are laid, and once it’s winter you’ll find a mix of mature and young earthworms, along with the eggs. By spring, most earthworms are mature. The cycle continues to repeat itself, and activity remains strong as long as your soil stays damp.

If you’re worried that your garden helpers might freeze during winter, you can protect them with mulch or a cover crop, which also provides the earthworms with a food source.

Looking to boost your earthworm population? You’ve got a few options. Adding organic matter is a surefire way to attract them. Garden clippings, grass, leaves, semi-rotted compost and animal manure are earthworm magnets. Nitrogen-rich compost is also a favorite. Just be sure to avoid synthetic nitrogen-based fertilizers. Worms are acutely aware of chemical and physical changes in their habitat, and they’ll abandon an area that’s satured in salty chemical fertilizer. You may also want to consider purchasing a “worm bin” and taking part in what’s called vermiculture. A worm bin kept in a cool, dark place like your basement can double as a composting system for kitchen scraps and a ready supply of worm castings for your garden.